Who Are The Eternals?

Another Addition to the New Phase of the MCU 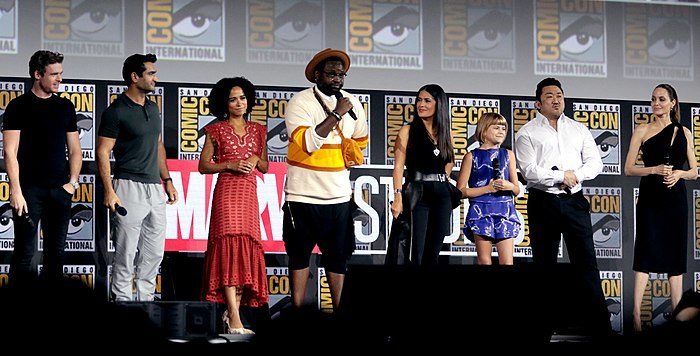 If you were born in this century, a living and breathing human who’s not in a coma, has fantastic movie taste and an awesome person overall, you’ve probably heard of the Marvel Cinematic Universe. The series that is one of the most beloved by the whole world not just because the actors are hot but mainly because the plot and production is top-notch and worthy of recognition. With it’s success and worldwide popularity, tons of fans were quite heartbroken when MCU announced that Avengers: Endgame will be putting an end to the third phase of the movie franchise, hushing all the theories about the reincarnation or revival of some of the fallen Avengers with complete finality. Well, lucky for us a new phase of MCU will be starting and among these to-be-released movies is the highly anticipated “The Eternals”. A league of supreme immortal beings facing yet again, the villains of the universe. Familiar but different. I guess this is how MCU tells us that we, the MCU fans are still worthy after all.

Imagine this, the Avengers on anabolic steroids with more resplendent attires and foreign accents. Yep, that’s the Eternals. Long ago, when all people had to worry about was rats and roaches and not aliens and a villain that looks like an evil Barney, big old space gods known as the Celestials, created The Eternals. Since they seem to abhor the idea of peace, they also created The Deviants to be the natural enemies of their creations. The Eternals chose a ruler named Kronos that dabbled with scientific and cosmic forces and let’s just say that it didn’t end well. He became a grand space consciousness and vaporized himself. On the bright side, the Eternals were gifted immortality and god-like powers. Kronos’ son, Zuras took his place but chose to leave, father Eternals of his own and become The Mentor. Unfortunately, he also spawned Thanos because condoms we’re apparently out of stock in the 7/11 of the universe. Anyway, while the world was being annihilated by their dear cousin, Thanos, the Eternals chose not to interfere for reasons that remain unknown. Several details of the plot of the movie has not yet been unveiled and it is up to us to discover the answers once the movie is released. Will it be as good as the previous movies of the Marvel Cinematic Universe? I guess we’ll find out.

Jack Kirby mind-blowing masterpiece when he returned to Marvel in the 1970s.

With Marvel Studios keeping us on edge by not revealing even miniscule bits of the plot, they managed to provide an accurate list of the Eternals and their supernatural powers. Starting off with the legendary Ikaris. Being the one of the Prime Eternals, he has the ability to fly with unbelievable speed and can shoot beams with his eyes. You can say that when he gives you a death glare, expect death.

The second Prime Eternal is Azura, also known as Thena. Inspired by the Greek Goddess Athena, she is a warrior goddess with telekinetic abilities and a royal badass that can conjure fire, weapons and administer pain.

Another strong female warrior is Ajak, an incredible combatant and a mystery. It is believed that most of her abilities are yet to be unearthed and is something to look out for.

A good team is nothing without a genius like Phastos, the inventor and another walking puzzle. With a cryptic past and very vague life story, he’s as lethal as the others.

A little flair and glee is good from time to time and is provided by Kingo. Despite his jaw-dropping samurai skills, he can’t seem to keep away from the spotlight of being an entertainer.

If the Avengers had Pietro, the Eternals have Makkari, the speedy one that can literally travel the speed of light. Let’s just hope that he won’t leave us as soon as Pietro did because we probably won’t see that coming.

Just like his namesake, Gilgamesh is gifted by the gods. He can control his molecular structure and has otherworldly strength that can kill you with a flick of his finger.

If Loki had a daughter, it would be Sprite. The sneaky Eternal, a trickster and an illusionist. Despite her young age, her abilities continue to impress and her potential never ceases to bloom.

You’ll probably guess the moment you hear his name. Druig. Sounds villainy, right? Well, considering his skill set of being the lord of nightmares and flames and also being a mythic druid, we can’t deny that he has the greatest potential of being the villain and is rumored to be. I guess we’ll know soon enough.

Last but not the least is Sersi, the person you’ll want to be on your side whether it be a slapping contest at your school’s backyard or a war with the ancient gods. An amazing person but don’t make her mad because with her prowess in matter transmutation, she can turn anything into whatever she wants. She’s like a colorful mushroom, pretty but deadly.

Now that all these Eternals are named, with star-studded casting to play each of them and an intriguing trailer that keeps us clueless, I guess it’s safe to assume that this movie will be more interesting than a grape getting surgery and is something worth looking forward to. October is near, and so is the answer to our questions. Who is the villain? Who will win? Is there gonna be a sequel? Is New York gonna be destroyed again? Will there be a new love team? Is someone gonna die? Are there gonna be aliens? Are the aliens still gonna look like Squidward? There are lots of things to wonder about and knowing Marvel Studios, disappointing the masses is not their strong suit. Brace yourselves, fellas! We’re in for a hell of a ride!

Get a head start on the MCU's upcoming blockbuster movie, by reading these classic Eternals titles: